ENTSOG operations are governed by its General Assembly, which leads the Association and has full powers to enable it to achieve its objectives. Its tasks include the admission of Members; the appointment of the Management Board, the General Director and Business Area Directors; the establishment of working and regional groups; and the adoption of ENTSOG deliverables.

The internal ENTSOG business areas are divided into four areas: Market, System Development, System Operation and Strategy, Policy and Communication. These areas deal with the many activities with which ENTSOG are tasked - the development and implementation of network codes and guidelines, activities associated with scenario building and future gas infrastructure planning, cooperation for security of supply and providing transparency and technical cooperation, and the identification of strategic aspects and policy monitoring. The management team has five support groups which provide compliance, financial and other services across the association. These are Legal, Financial, HR, IT and Research, and Administration. 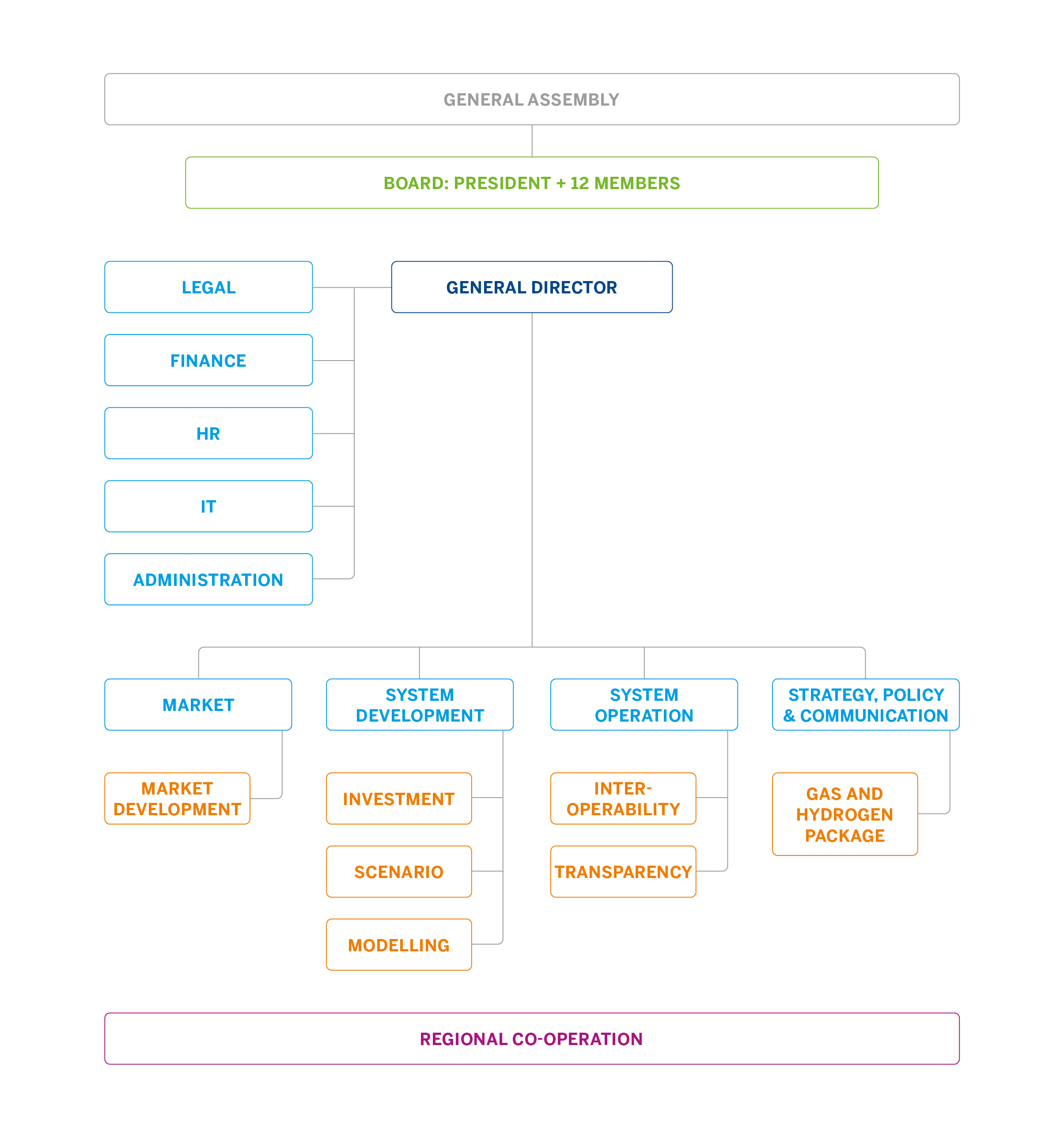 ENTSOG's management team provides supports to complete fulfilment of ENTSOG tasks and deliverables and is responsible for direct, continuous interaction with the European institutions, ACER and European stakeholders.

Bart Jan studied Monetary Economics at the University of Groningen. He started his career in 1996 at the Dutch National Bank (Nederlandsche Bank) specialising in sovereign risk and export credit insurance.

In 2007 Bart Jan started working for Gasunie, where he had various functions in the field of regulation, business development and management of joint ventures. Since April 2015 Bart Jan was on the management team of Gasunie Transport Services (GTS), as Manager Network Planning.

On 1 September 2017 Bart Jan was appointed as CEO of GTS. As of that date he also has joined Gasunie’s Executive Board.

The ENTSOG General Assembly unanimously approved the appointment of Mr. Bart Jan Hoevers as President of ENTSOG for the term 1 July 2021 - 31 December 2024.

He was involved in a number of business development projects aimed at regional gas market development - both infrastructure projects in CEE region as well as LNG, booking platforms and cooperation with Energy Community. Within GAZ-SYSTEM H2 task force, he was engaged in evaluating new gases preparedness: working on readiness of the Polish gas networks, European Hydrogen Backbone, IPCEI initiatives and Hydrogen Storage Project in Poland. He represented the transmission sector in number of Partnerships for Hydrogen Economy Development and Biogas Development on National and European level.

Between 2019-2021, Piotr was GIE Board Member acting as a sponsor of the CH4 Area. Since 2016, he was a member of the GTE Executive Committee to supervise activities of future sustainable solutions in the natural gas infrastructure. Prior to that, between 2008 and 2016, Piotr was Director of the Brussels Office of GAZ-SYSTEM, in charge of managing the company’s EU affairs.

Before joining GAZ-SYSTEM in 2008, he was employed by the Polish Oil and Gas Company (PGNiG S.A.) and was seconded to its Representative Office in Brussels.

The ENTSOG Management Board has a central role within the structure of the association and implements General Assembly decisions. In conjunction with the General Director, it coordinates overall ENTSOG representation and its day-to-day management, distributing projects between the working groups and teams and coordinating their work.

The Management Board consists of 12 members and the President, all appointed by the General Assembly.